Family topic and the 'Alien family'

My year 4 classes have a focus on family this half term.

Talking about family can be a sensitive topic so Janet has come up with the ‘Alien family’ and Ana - our in house illustrator :-) has designed some friendly looking aliens: dad, mum, the brother, the sister and the baby. Children LOVE them!

Janet has already blogged about this last week (here and here) as she’s been observing and saw the topic in action.

Here is how I’ve started this unit.


Show the pictures of the aliens as flashcards, let the children discover them and anticipate who they are in the family: the dad? brother?

Repeat a second time and ask ‘ il y a combien de personnes dans la famille?’ Count the characters. Ask a child to tell you what this means?

Then introduce the nouns as you would do in any topic. After each one ask a few children ‘Qui est-ce? (make it pacey)


With Janet we have been discussing how to best introduce grammar to our pupils, (especially gender) and also the need to make links with previously learnt vocabulary. We need to guide children about using their knowledge of sounds in colours and numbers (for ex.) to help them work out how to pronounce new, unfamiliar nouns. I’m calling this step ‘unpacking’ the nouns.

What does this mean? What do I do?:
1)After introducing the new vocabulary with flashcards write the nouns on the board with an article (definite or indefinite). I strongly believe children should see the written word early on as some children need to see the word to pronounce accurately.

2)Take each noun and ask children if they can think about a number or a colour that has the same letter string – you might need to identify the letter string to start with.  Ex: maman > an : blanc or orange.

3)Draw children’s attention to the article and mention feminine & masculine (NOT male/female or boy/girl) Tell them that’s all they need to know for now, let them get used to the idea of 2 words for ‘a’ and concept of gender.


That’s where the fun begin! I've used an app called Voice Plus on my Ipad -available on the App store. (I'll tell you more about this app soon!)

Here is an example of the children practising family members vocabulary as aliens!

A very effective lesson…well at least my pupils really enjoyed it!

I think for a 30 minutes lesson we’ve covered quite a few skills (listening, speaking, reading, grammar) and it does demonstrate progression (at beginner level).

Following on from last week’s post on numbers and Halloween sweets. I’ve put together a list of simple ideas – if you read my blog you know I like simple ideas – for activities using mini pictures. Mini pictures are one of my favourite tools because you can do so many things with them !

If you’re looking for some Halloween inspired ideas for this last week before half term then you might want to download these mini-pictures: 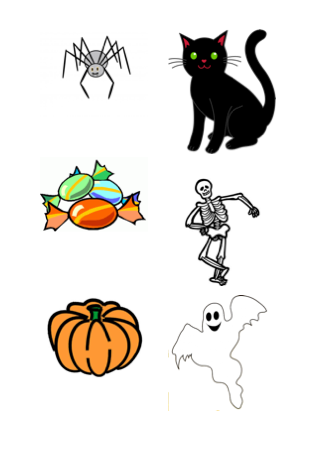 Below are a few of my favourite games to play with them.

1 picture per person
Call out 1 item then 2 items, etc.

*variation with a 2 sets of cards between 3 : fastest person in each group to pick the pictures and wave it (2 pictures / 3 children > competition !)

I am starting to look at ways to practice numbers to 20 with Year 2 at Culcheth Primary School. This particular class is now in its second year of learning French and have become very confortable with numbers to 10, so to keep them interested and making progress I’m going for ‘bigger numbers’.  I think that particular class is ready!

This is what I’ve done so far:


This song is already in my resources for Upper KS2 and children love it!
As the children are getting more familiar with it,  I like to pause the song and ask the children what number comes next.

In KS1, we have a focus on ‘Harvest’ time in France and we have been talking about sunflowers and grapes and used it to practice counting, colours, etc.
One of the favourite activity of my classes is to count ‘things’ i.e sunflowers in a field, how many grapes on a bunch?

I ask the class how many we should count. They have to suggest a number in French between 0 and 20 and then they can come and count them out loud (with the class joining in) on the interactive whiteboard, marking them with the pen as they go along, then we continue until we counted all the sunflowers, grapes.

With Halloween coming up I thought we could count sweets, here is a PowerPoint of pictures of sweets you can use - if you like. 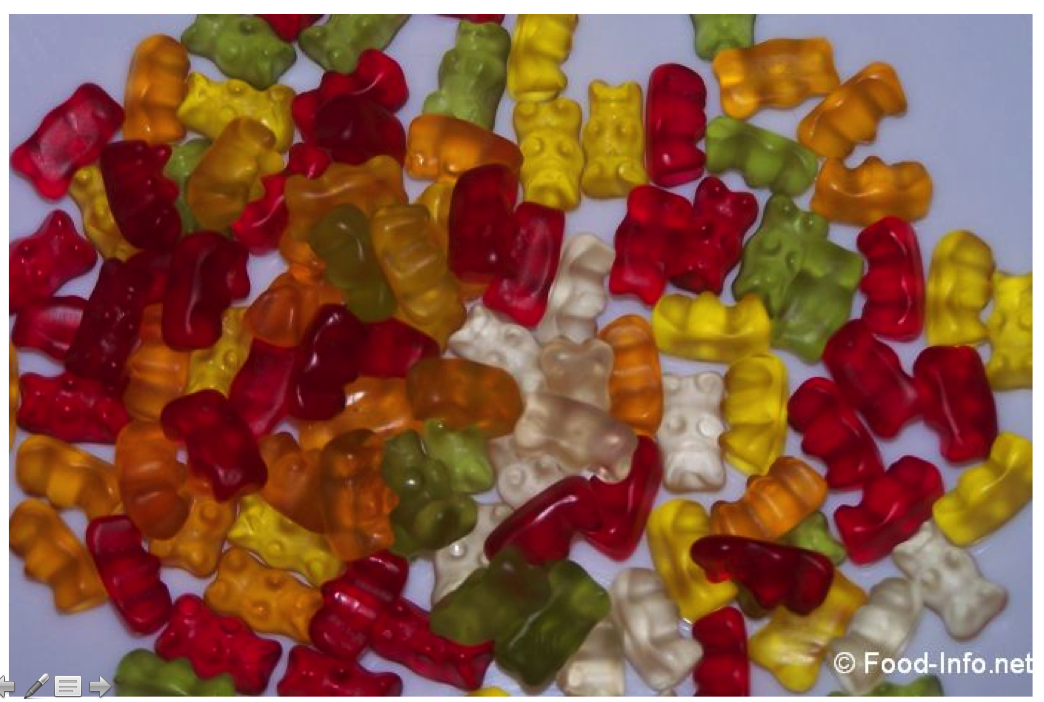 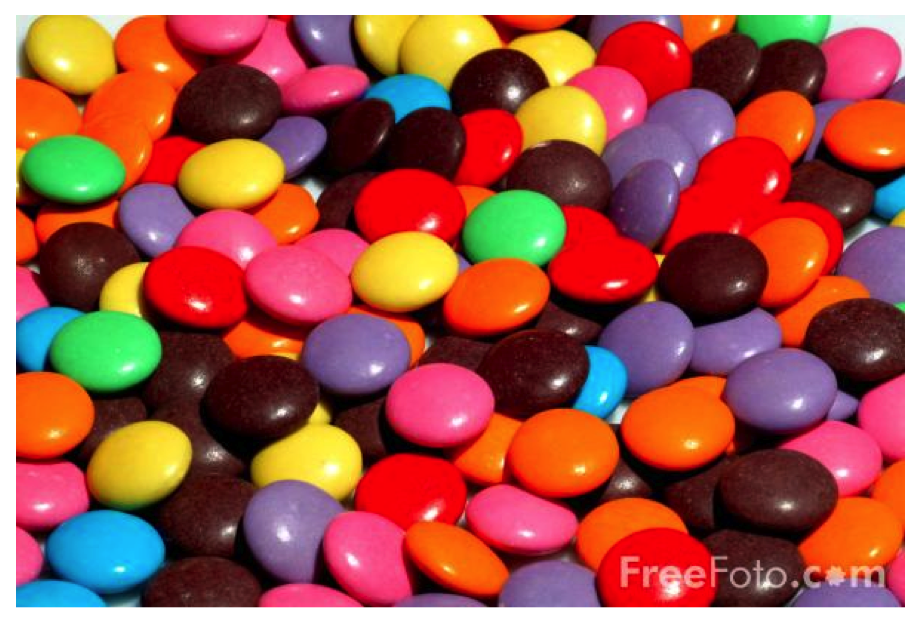 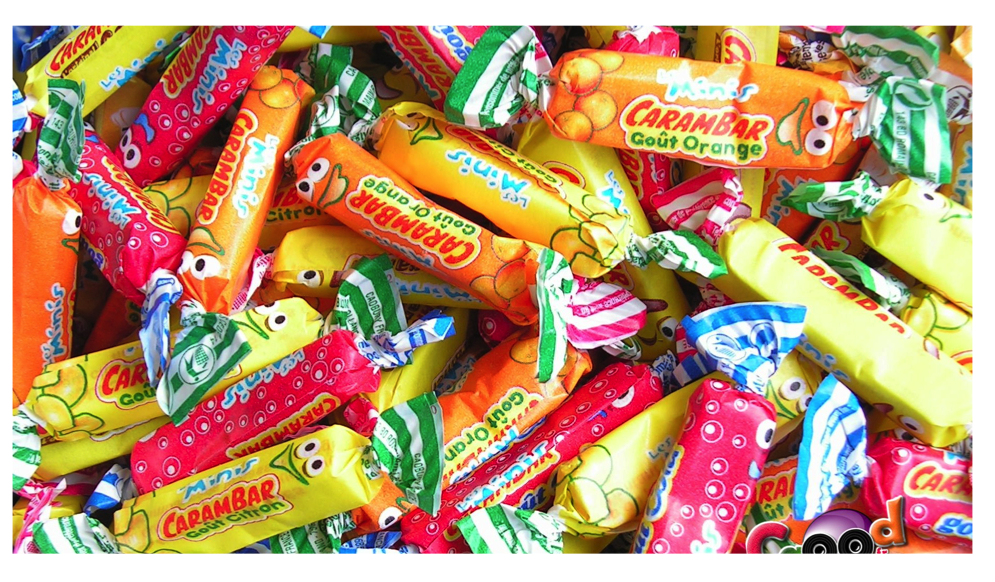 I like this approach of constantly revisiting things instead of ticking things off as done plus it means you can make your resources last longer – I’ve used the same picture of a sunflower field for the last 3 lessons!

I’d reckon by Christmas most of the children will be able to understand/ remember their numbers to 20.

One of our focuses in KS2 this half term is school life; so far, we have been discussing differences and similarities and had a handwriting lesson to practice our French cursive handwriting.
Last week, we were having a maths lesson… in French. We practiced our numbers to 20 and learnt the names for the symbols:

We did some mental maths and some simple sums on the mini-whiteboard. We made it into a challenge by playing the countdown music and had to get our answers ready in 20 sec or so.

Then we had a go at some ‘physical maths’.  We showed the numbers using our fingers and used our arms to make up the symbols: cross shape for add, etc. It’s pretty easy to work out the actions for each symbol.

We did a couple of examples at the front with 5 volunteers, one person per ‘item’ in the sum:

As well as showing their number or symbol they had to say what it was:
i.e cinq plus cinq égal dix

Finally, the children got in groups of 5 or 6 and prepared their own physical maths sum to test the rest of the class.

Another focus in Y6 is ‘all the about me’ including introducing a friend or classmate. We are trying to gently move the children (not beginners) from the ‘je’ form to the ‘il/elle’ form.

As a warm up/starter we had a game of ‘don’t break the chain’ with je m’appelle, il or elle s’appelle, etc.

First, I introduced the idea of the difference between je m’appelle and il/elle s’appelle by asking children ‘comment t’appelles-tu’ and then saying (and exaggerating) ‘il/elle s’appelle’ + pointing to the child.
Pretty quickly they worked out I was taking about the 1st pers. vs. 3rd pers.

I set them the challenge on their table (4 or 6 children per table) to say what their name was, adding the previous person’s name and so on .i.e. je m’appelle… / il s’appelle / elle s’appelle… / etc.

We added an element of competition and tried to be the fastest table to say everybody’s name without breaking the chain (without getting it mixed up with je and il/elle).

I didn't think it would be THAT much fun, but it was, and all the tables had a go at being the fastest

If you’ve been reading my blog you know I like simple ideas, well there you have...2 new – tried and tested- activities!
Posted by Unknown at 06:52 3 comments:

Continuing the celebrations for European Day of Languages

This morning we had our belated European Day of Languages celebrations at Alderman Bolton Primary School.

Every year we invite parents to watch the French lesson, each class has a 20 minutes slot and they all prepare something to perform: a song, conversation, game, joining in a story, etc.

To make it not too time consuming for the teachers, in terms of preparation, we choose something the children did the year before so they already know the vocabulary, the songs, etc.

You can see the program below and the activities each class prepared: 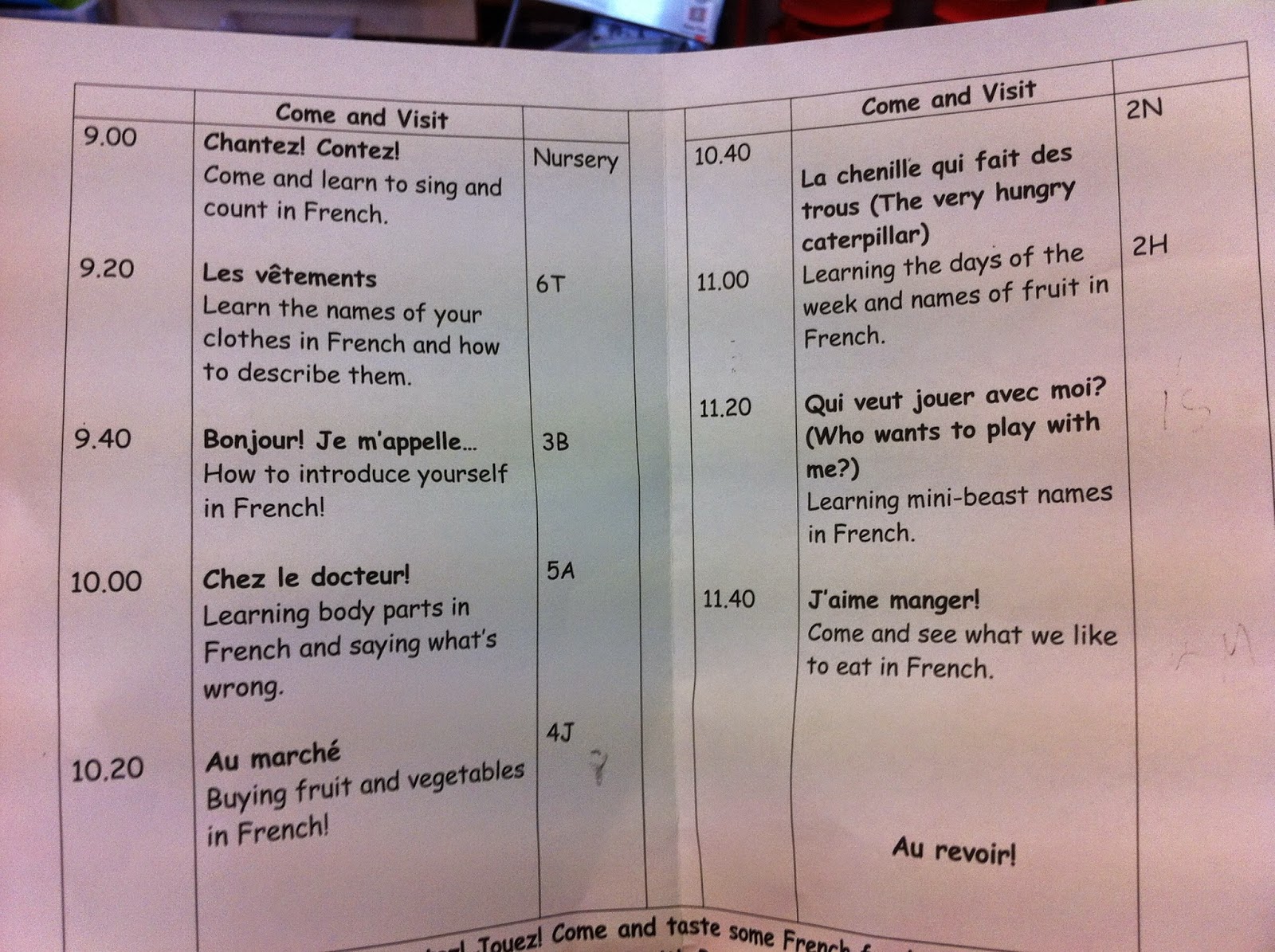 It was a brilliant morning and the children (and teachers) did so well! The parents really enjoyed it too!

I was particularly impressed with the Reception classes who had the parents involved in the activities (making French flags) and also their French café with a view of the Eiffel Tower ! 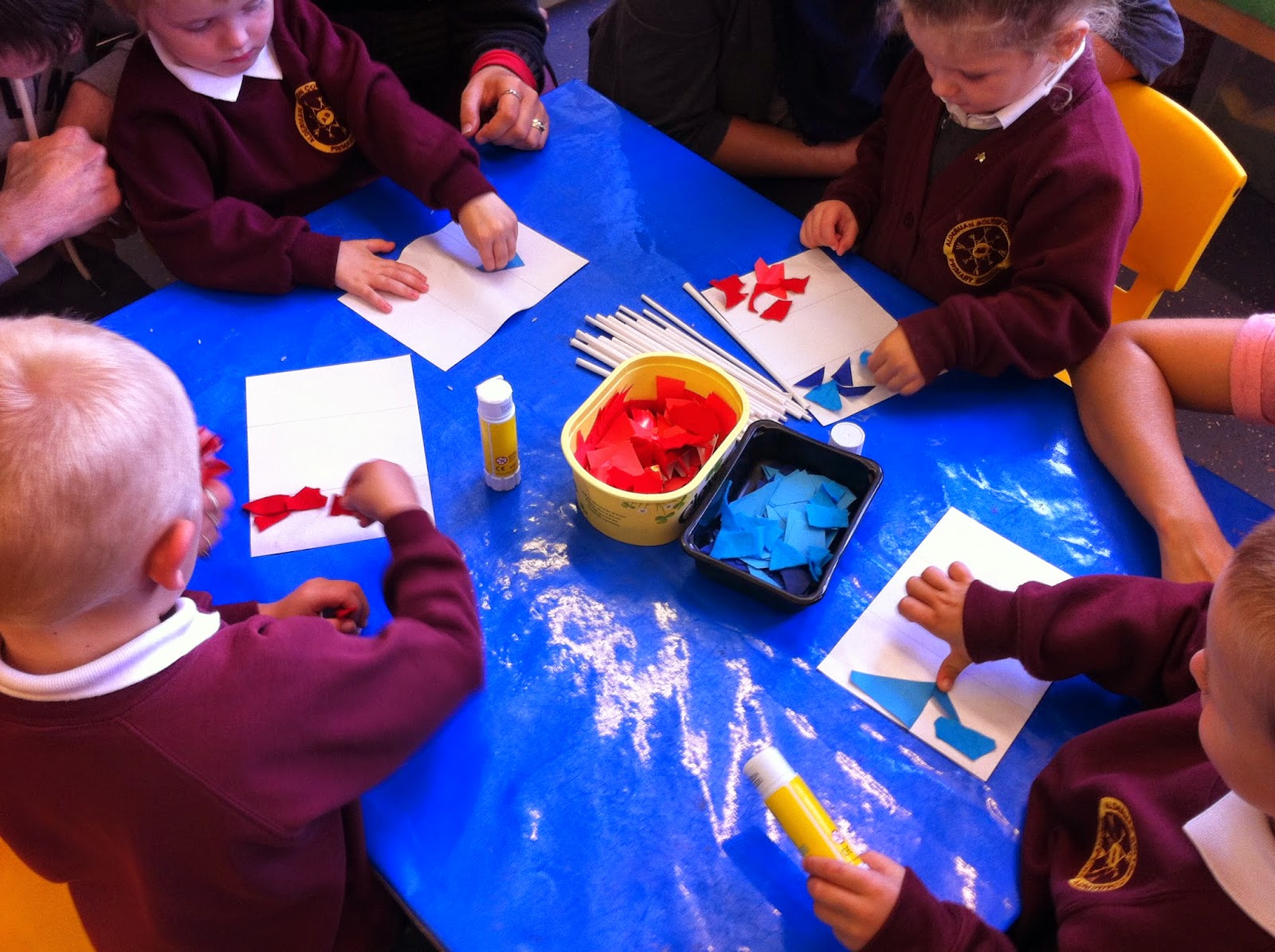 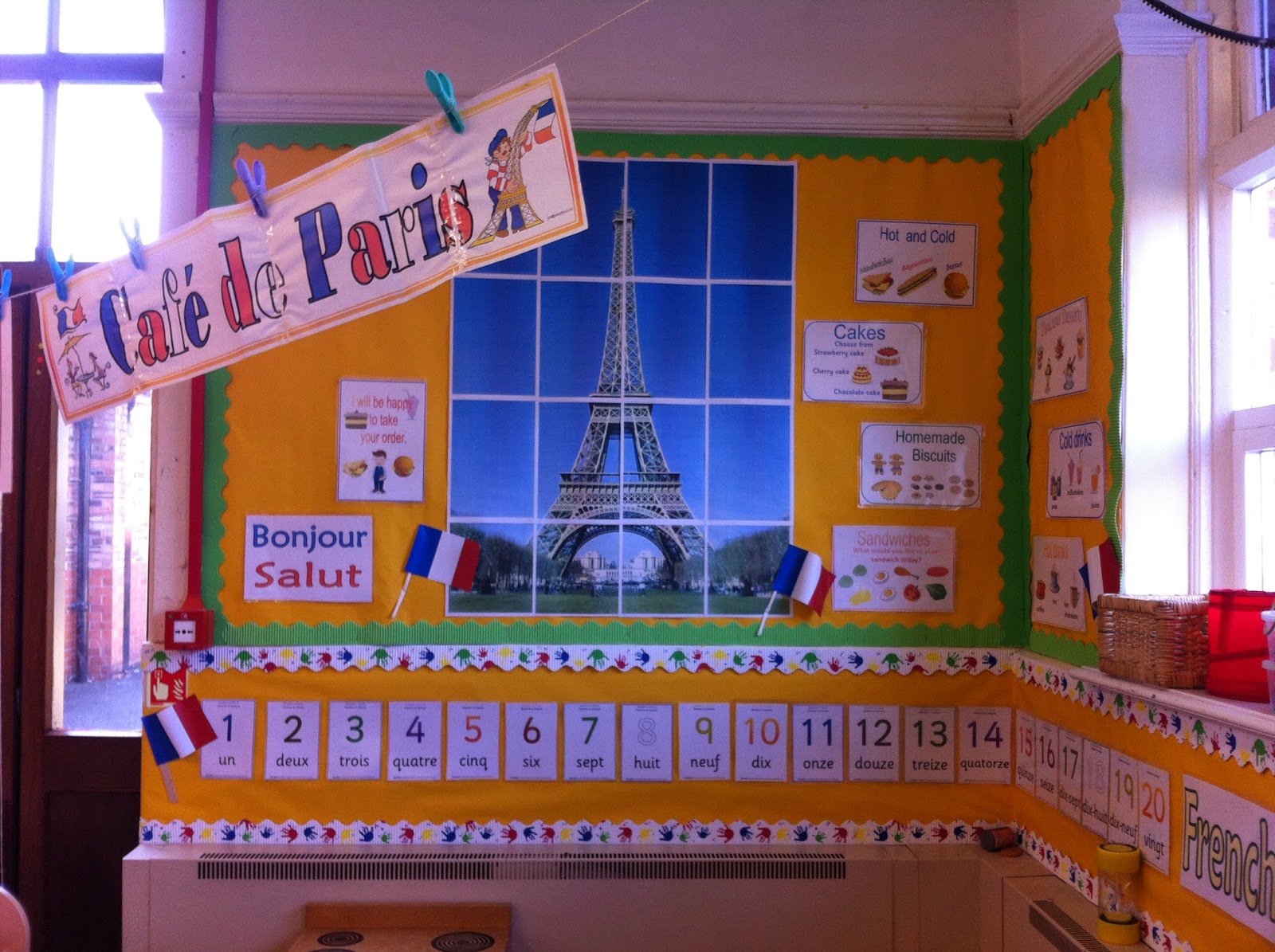 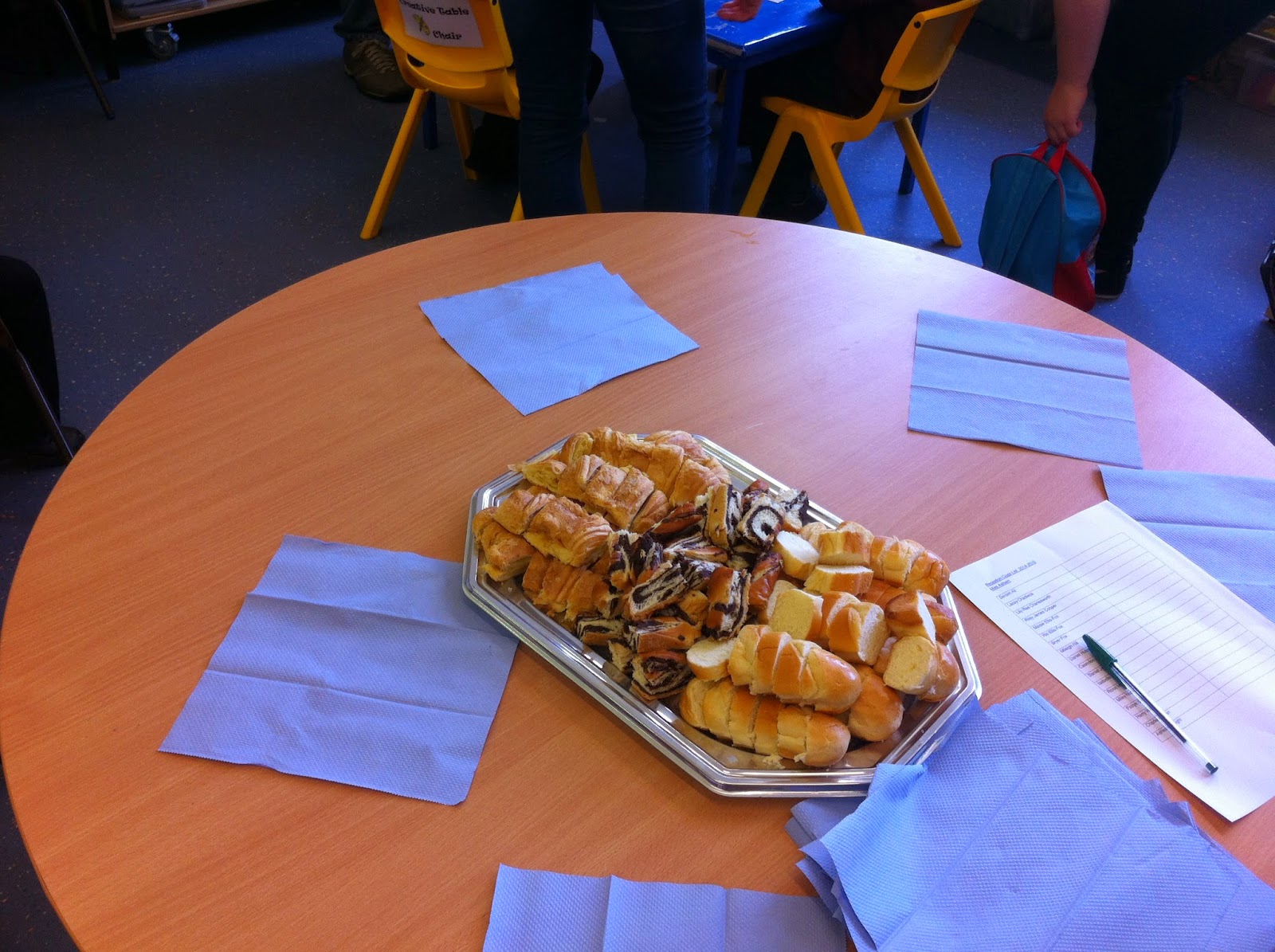